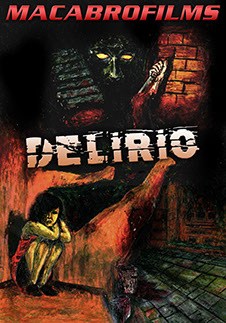 This was the first official short movie of Macabrofilms, with a fair share of problems, mostly technical issues. It is a story I have written when I was 15 years old, and my first attempt to create a movie out of it. Years later, this little story evolved and went through a lot of changes. The material is actually the basis for a fresh new 4K very important movie of ours, PARAPHRENIA.

Judy, a young girl who works in a restaurant, has to walk for a couple of miles late at night to return back home. The shortest cut is through an abandoned warehouse, which gives her the creeps.

Judy is experiencing Delusions from time to time, most of them related to losing her mother in an early age, the day she had her first period. Her mind related both events in a very strange way. Her relationship with sex is not normal and she keeps blaming herself for the death of her mother.

That night, Judy is convinced that a stalker is following her. She is definitely in danger, but she stole a butcher's knife from the restaurant and she is ready to defend herself.

Right outside the warehouse, a deformed creature attacks her and manages to grab her knife out of her hands and kill her...

Three days later, a very young couple, that is having a first date near by, discover the body of Judy.... Someone has stabbed her in a very sensitive area of her body...