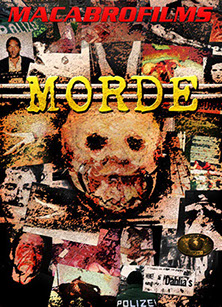 A guy in Berlin starts impersonating a plumber, by putting an add for a fake company on websites and social media, with prices that are unbeatable. Soon afterwards, he receives a number of phone calls for fixing a great number of small appliances, faucets and toilets. He claims he is extremely busy and makes each appointment for at least 2 or 3 days after. That way, he has enough time to check the victim. He goes straight to women between the age of 20 and 30, while he avoids males and women older than that. He checks if the victim lives alone, if she is strong or weak, if she receives visits from friends, family or boyfriend and then he plans his move.

He is typical and friendly at first, but also very accurate in capturing the woman and taking her life away. But that is not all... He is obsessed with famous crime scenes, he studies them, he is constantly searching for crime scene photos and he wants to imitate them very accurately. His first three murder scenes, look exactly like the Charles Manson's Family's Murder Scene, the so-called Helter Skelter with Sharon Tate, like the O.J. Simpson murder case and how they found Nicole Simpson in front of the stairs in her back yard, and also the Black Dahlia Murder, with the woman cut in half. This is just the beginning for him, as he plans to move on to more complicated crime scenes and to also locate victims that look almost exactly like the real victims of those famous crimes.

Two police detectives start working on the case. They have no real clues at first, they only assume that the guy is pretending to be someone else to get inside the house in a normal way. The only other clue is a security cam picture of a huge guy wearing a very disturbing mask.

I have start working on this movie back in 2007. We have shot a number of scenes, including the 3 murder scenes and the aftermath that looks like the original crime. The movie was actually supposed to become a full length film, my first one in German Language.  I found actors who have lived in Germany or were German and we managed to find a lot of German Props and even police uniforms.

I have shot some additional scenes back in 2011 and made a work-print. The movie looks like an original GIALLO movie, like the ones from Dario Argento, Mario Bava, Sergio Martino and everything else, combined with some fresh American Crime Thriller style.